A licensed wildlife carer sent me this information (thank you, Terri!) and now I’m publishing it here. Because I think it’s important.

Lots of people know that chocolate is poisonous to dogs, but did you know that bread causes a lethal jaw disease in wallabies and kangaroos?

You wouldn’t train your kids to take lollipops from strangers. Likewise, when you feed wild animals you’re training them to lose their fear of people. While that might seem fine at first glance, all too often it ends badly.

There have been lots of stories in the papers about morons going to places where wild animals have lost their fear of us, usually due to regular feeding, and then harming or even torturing the animals. As long as that ugly minority of people exists then it’s going to serve the critters well to keep being wary of people. All people. Even the nice ones.

Now, I understand how hard it is emotionally to not feed wildlife, because I want to do it too. Me personally, I get my being-close-to animals fix by taking pictures of them through a long lens (the wallaby at the top of this page for example, was about 20 metres away.) But I know we don’t all have that option, so here’s what you need to know.

Lots of people love feeding birds, without understanding the implications of it. It all starts with the fact that wild birds are used to eating huge varieties of food with particular needs that might only apply to certain species.

A Pied Butcherbird about to fly away with a lump of minced meat.

These birds are insectivores. The diet they need is mainly a mix of meaty types of insects, combined with other small animals. Many people acting with the very best intentions feed them meat from a butcher such as cheap mince, sausage etc. Unfortunately those products are loaded with chemical additives that are lethal to birds. Some of the birds end up dying as a result of those products, in pain and out of sight from the well-meaning folks who fed them.

That’s why I never feed the ‘black-and-whites’. 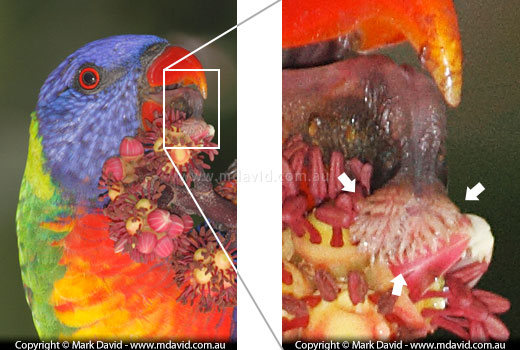 Close-up shot pointing out the papillae (fine hairs) on the tongue of a lorikeet. These birds need the papillae to mop up nectar and pollen.

Lorikeets eat native nectar, pollen, soft fruits, and they especially love berries. Their tongues have tufts of papillae (extremely fine hairs), which mop up nectar and lots of pollen from flowers. When you feed them bird seed, it breaks those hairs off their tongues, which leaves them unable to eat their proper diet. The result is that over the following weeks or months they starve to death.

Sure, lorikeets love honey and will flock to it to gorge on it. But by filling up on all that sugary honey, the birds are missing out on the pollen they need in their diet. It’s like allowing kids to fill up on cake every night before dinner. This is how the birds suffer from diet deficiencies even while their bellies are kept full.

But it gets worse.

A study of mass deaths of lorikeets in NSW showed that the birds had been killed by a condition called necrotizing enteritis. That’s a disease caused by a combination of inadequate diet and poor hygiene. In the case of that study, it turned out that the birds had been crowding onto tiny, dirty feeding trays — a situation very much different to their normal behaviour where a flock of birds might be spread across several trees.

Another disease, called psittacine beak and feather disease, causes cockatoos, parrots, lories and lorikeets to develop deformed beaks and to lose their feathers. What happens is that birds which are already infected are lured to a feeding station, where they leave droppings. Other birds are then lured to the same place, where they crowd and flap around, splashing through the infected droppings and picking up the disease.

Yep, this is another important one: never feed any birds black sunflower seeds. The black ones have far too much oil and that will kill the birds. If you really ‘have to’ feed birds make sure the seed mixture only has grey sunflower seeds.

First of all, there are two main species of possums that visit homes and get fed by people. Both the general public and even many of the experienced carers often get their identification of possum and glider species wrong. So to start with, here’s a little bit of help with identification.

Ringtail Possums are predominantly brown, cinnamon, nutmeg, light/dark grey and can even have black areas. So colour is never the sole criteria for identification. A lot of people think Ringtail Possums are named because their tail curls into a ring but the truth is that the name comes from rings or bands around their tails. Gliders and other possum species tails also curl into a ring. Some say that a white ring/tip on the tail identifies them as Ringtails but that’s not true either. Other possums and gliders may also have a white tipped tail. Instead, it’s easiest to look at their ears. Ringtail Possums have round ‘Mickey Mouse’ ears.

Ringtail Possums and Greater Gliders have the same digestive system as a Koala. Therefore they should only be fed Koala food gum leaves. I mean, you wouldn’t give a koala fruit to eat, would you! Giving Ringtails and Greater Gliders fruit causes them to get a truly nasty condition called caecal stasis (bloat) which kills them with horrific pain over several weeks.

That’s why I strongly advise not to ever feed Ringtail Possums or Greater Gliders.

1: Brushtail Possum  2: Bread plays havoc with the gums of a kangaroo and this can lead to lethal gum and bone disease.

These guys will eat just about anything. For example, they like to help themselves to fruit and veggies in gardens. The scary thing is that they will happily munch on food that is poisonous to them.

Brushtail Possums can be many shades of silver, grey, brown, black, cream, (joeys can be pumpkin coloured). They have a fluffy tail that is usually black, but can have a white tip. Their tail also curls into a ring.

A tourist feeding a wallaby in an enclosed wildlife park. Using special food provided for the purpose at the venue, the animals were at least getting their dietary needs met, and the lack of fear this produced in the animals didn’t put them in danger either. That’s because they were protected from vandals and other bad guys by being inside the enclosure. So there are ways to hand-feed animals if you want to. But this isn’t encouraged in the wild.

Macropods (kangaroos, wallaroos, wallabies, tree kangaroos, pademelons, quokkas) are herbivores, grazing native grasses. Some eat native fungi, leaves and other native shrubs. I’ve seen members of the public sitting next to a Parks and Wildlife sign that states DO NOT FEED WILDLIFE while feeding wild wallabies bacon, eggs and bread! Unlike humans who can always eat unhealthy food, wildlife can’t handle stuff that isn’t part of their natural native diet.

If that last sentence seems a bit extreme, then consider this next bit.

Bread is a huge issue to all wildlife. With macropods it’s not only a death sentence, but a particularly nasty death sentence. What happens is, the bread becomes gluggy and sticky in the animal’s mouth. It then gets stuck between its teeth and ferments. The gums then develop abscesses and osteomyelitis (an infection that penetrates the jaw bone) kicks in. At this point, pus starts leaking from the resulting jaw wounds, and from then on the poor animal is not only unable to eat anything but is also suffering extreme pain. Eventually the creature starves to death. Lumpy jaw is the name given to infections of the gum and bone, which cause abscesses and osteomyelitis (bone infection). The disease is caused by infection of penetrating wounds in the mouth by anaerobic bacteria (bacteria that doesn’t need oxygen to grow.)

Bread isn’t looking so good any more, is it.

But it’s not all bad

This waratah (Shady Lady variety) flowered readily in a pot on my apartment balcony when I lived in Sydney. It, along with some other flowering native plants in pots, attracted a constant stream of visits from nectar-feeding birds. Just be aware that this can be dangerous if you have young kids at your place. That’s because a large pot like the one this plant was in can be used as a step by curious toddlers to climb over the balcony railing.

After all those horror stories you deserve some good news. And the truth is you can still experience the fun of watching wild animals feeding, just by making your place friendly to them. In my garden I’ve been planting native flowering trees and bushes, and the wildlife has definitely noticed. I now get to get enjoy lots of sights of critters feeding and exploring and just doing what critters do.

And that’s an option available to lots of us.

Even when I lived in an apartment in Sydney, I put some Grevilleas, Kangaroo Paw other native flowering plants into some pots on the balcony, and then enjoyed the regular sight of native nectar-feeding birds visiting for a feed. Oh yeah, and those plants looked great too.